A few weeks back our CEO Cyril Coste sat down with Foiling Magazine, who were eager to find out more about the eTow and the perks of this electric towing watercraft. Have fun discovering what technology the eTow uses and how we came up with the idea for a personal watercraft.

Foiling Magazine:
So, the eTow… it looks pretty futuristic. Have the robots finally taken over?!

Cyril Coste:
Well, actually..the first time the team was presented with the idea for the eTow, there was a quiet look of disbelief and astonishment going around the room. Creating a fully self-controlled electric towing watercraft seemed more fitted for a futuristic SciFi movie, than a product presentation pitch. However, at Takuma we don’t give up easily on ideas and thrive on overcoming any obstacles when it comes to the innovation and design of new and transcendent products.
And so, we became the first to create the eTow, a self-controlled electric towing watercraft, that allows you to extend your playground, explore unknown spots and discover new sensations. 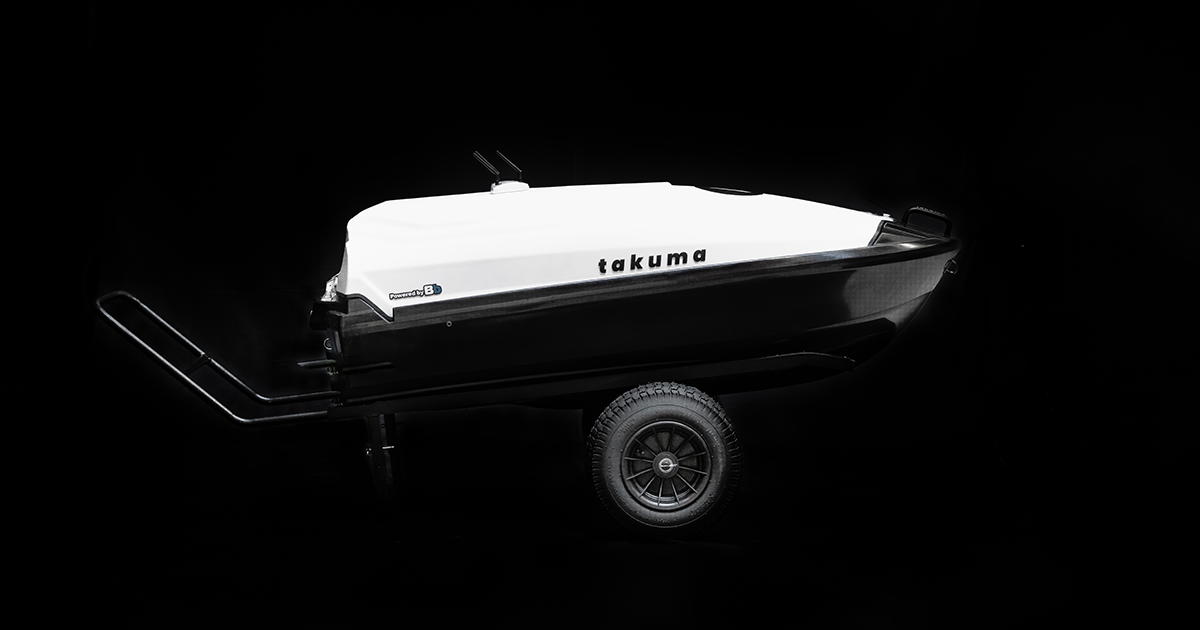 Foiling Magazine:
Tell us about some of the tech involved in the eTow.

Cyril Coste:
Well, it was definitely a challenging process to develop the eTow, however we gathered a lot of experience with our eFoils. On one side we worked very closely with our partners at BBtalkin, pioneers in watersports Bluetooth communications. On the other hand, we developed a whole new engine system (patent pending). The V-Jet propulsion, which is used in the eTow changes everything. It is much safer and stronger and allows for easy steering.
The proportions and weight are optimized to make the eTow fit from flat water to windy choppy conditions and self-right in case of capsizing. 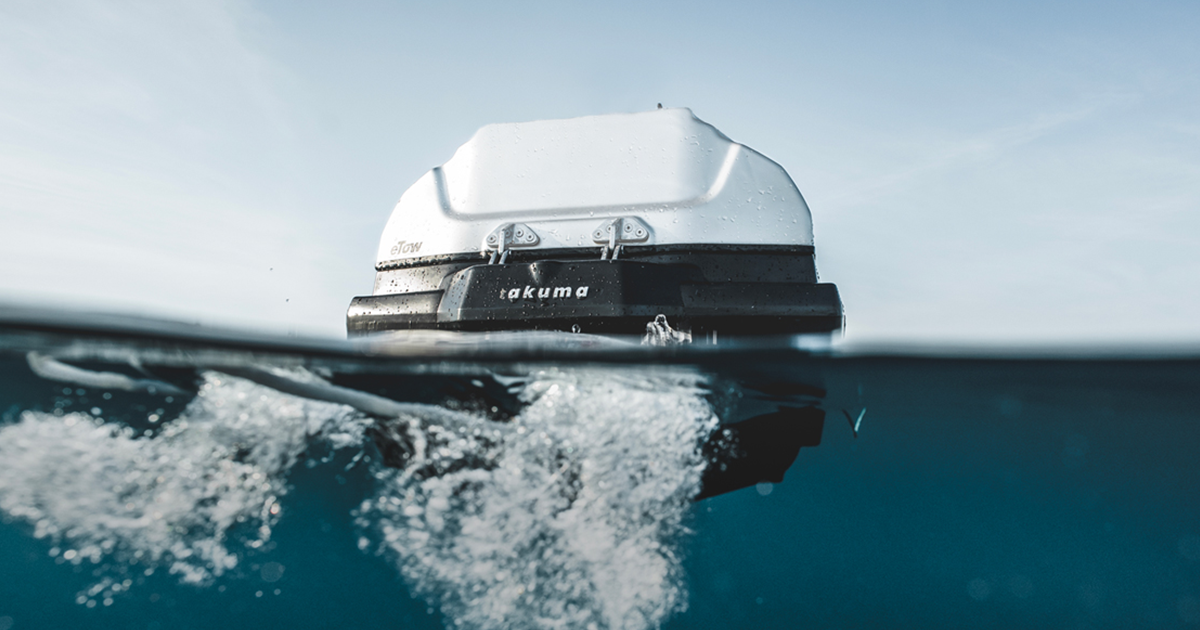 Foiling Magazine:
If you happen to fall, does the eTow realise this?

Cyril Coste:
You control the eTow through a remote you have in your hand. The eTow remote works very similarly to our eFoil remotes. All the Takuma remotes have a signature double safety feature. First, you have a trigger at the back of the remote, that you need to press down for the watercraft to start and accelerate. Once you let go of the trigger the eTow stops automatically.
An additional safety measure of the eTow remote is that once it is submerged underwater, it stops the eTow automatically. So, no worries, the eTow won’t leave you behind. 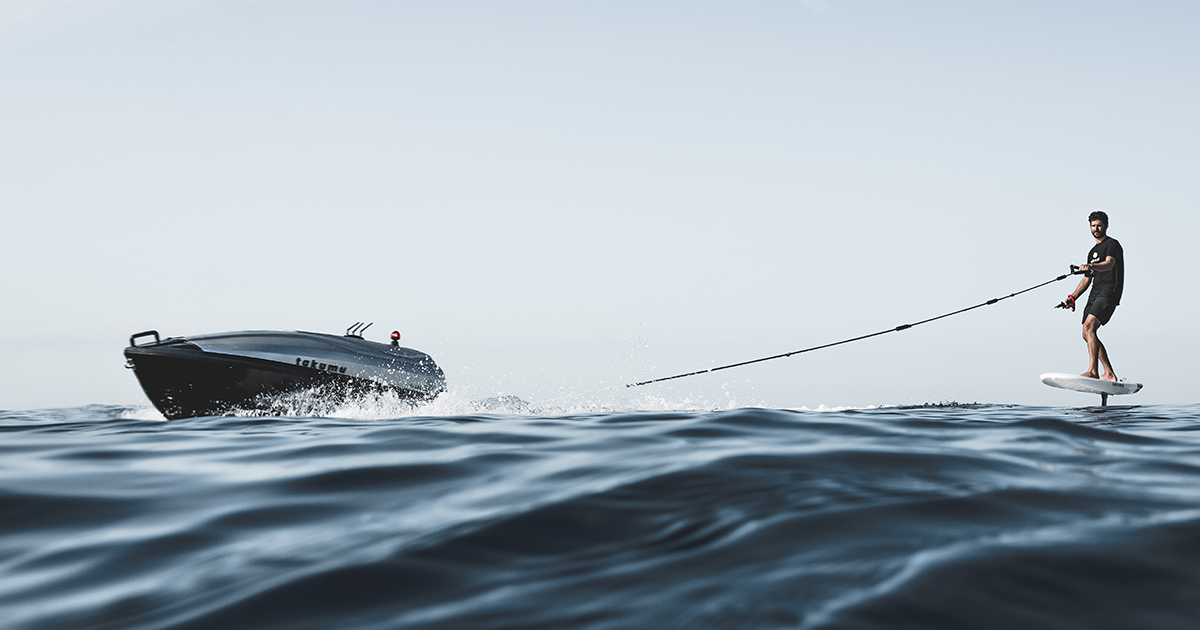 Foiling Magazine:
What’s the signal range on the eTow?

Cyril Coste:
The eTow remote has a range of up to 600m. Which if you think about it is quite something. You can get towed into waves, take the wave of your lifetime and still manage to navigate the eTow back to you. Also, if you are teaching someone and you are the one with the remote, you can be on a boat or even on the shore and control the eTow from quite a distance.
A great feature that we are proud of, is that it’s parable with any compatible drone remotes which increases the eTow reach to up to 1,5km. This wide range is why a lot of lifeguards and coast guard teams are very interested in the eTow, as they could use it for rescue situations.

Foiling Magazine:
And what kind of battery life does the eTow have? Is it dependent on the weight of whomever it’s towing? (asking on behalf of a friend!)

Cyril Coste:
It depends what kind of board your friend is on. 😉 We designed the eTow for foiling. So, if you are foiling behind you can get an autonomy of up to 85min. The remote also lets you know through a vibrating signal that you are low on battery so that you don’t run any risk of getting stuck out on the water. 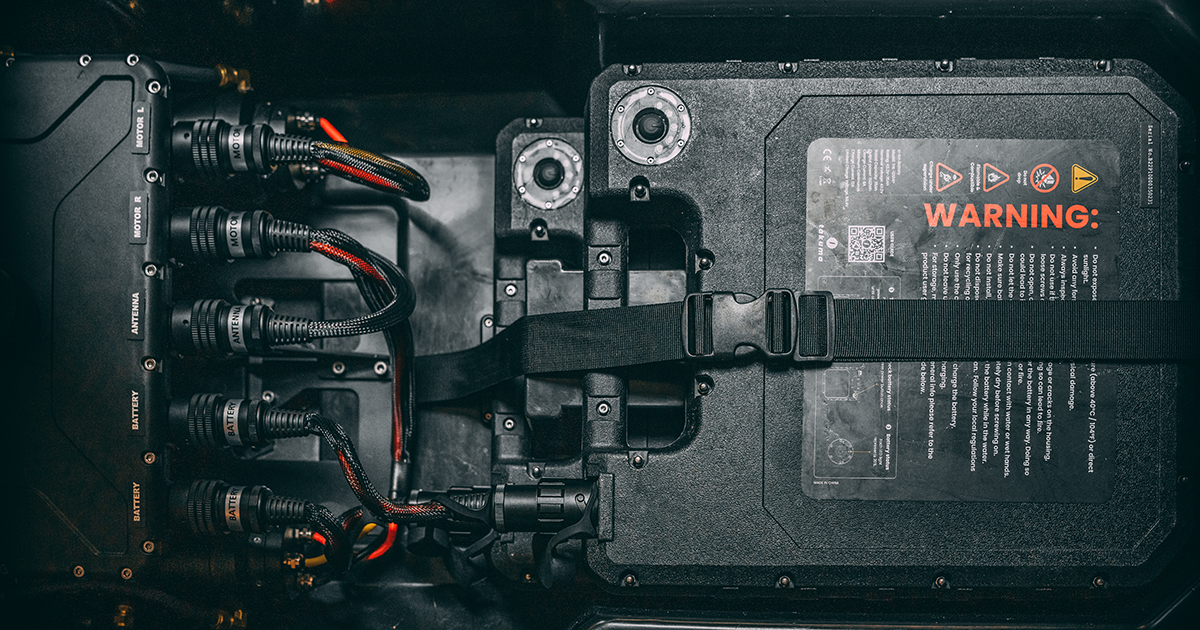 Foiling Magazine:
Tell us how the controller works… and did you consider integrating the controller into the tow handle? And what is needed for steering control on this personal watercraft?

Cyril Coste:
As mentioned before, the remote control works on a very similar system to all our eFoil remotes. You steer the eTow with a joystick like button, that allows you to change directions smoothly.
We did think about adding the controller into the handle, however once you let go of the eTow you wouldn’t be able to navigate it back to you…so it’s not that practical because you would have to swim back each time.
With the remote control in your hand, it’s very intuitive to control and easy to navigate while foiling, going downwind or taking a wave. 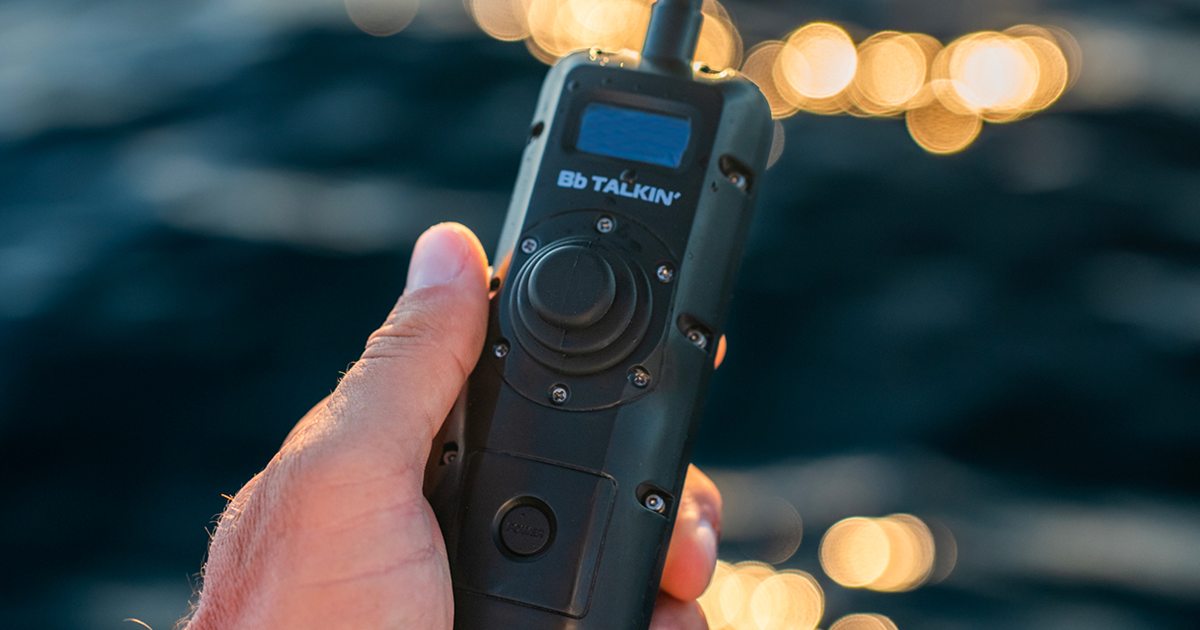 Foiling Magazine:
How is personal watercraft propelled through the water? Is the eTow jet or propeller based? How did you decide which was best to use?

Cyril Coste:
As you know a lot of research and development goes into all our products and the eTow was no exception. We considered a variety of propulsion options, however in the end the jet propulsion was the clear winner. The eTow is equipped with a powerful twin jet propulsion, each of the turbines having a 5,5kw power.

Foiling Magazine:
Does it have a return-to-home function?

Cyril Coste:
Well yes and no. We worked on a home return button however we decided not to go through with it due to safety reasons. It doesn’t have any sensors to drive back automatically however, since the remote has a reach of up to 600m you navigate it back to you. Once the eTow tows you into a wave you let go of the trigger. As soon as you have finished riding the wave of a lifetime, you can navigate it back to you with the remote control in your hand.

*If you want a deep dive into the eTow’s features and characteristics, we invite you to check out this video.

Foiling Magazine:
What are the main safety considerations when designing one of these?

Cyril Coste:
Like in any water sport you need to be responsible when riding and using the eTow. You shouldn’t be using it in the wrong conditions or crowded spaces; however, this is nothing new, it’s the same with kitesurf, wing foil or windsurfing.
We designed the product and especially the remote with safety in mind. We put a lot of research and development into the eTow remotes, to make sure, that the users are as safe as possible when out on the water. 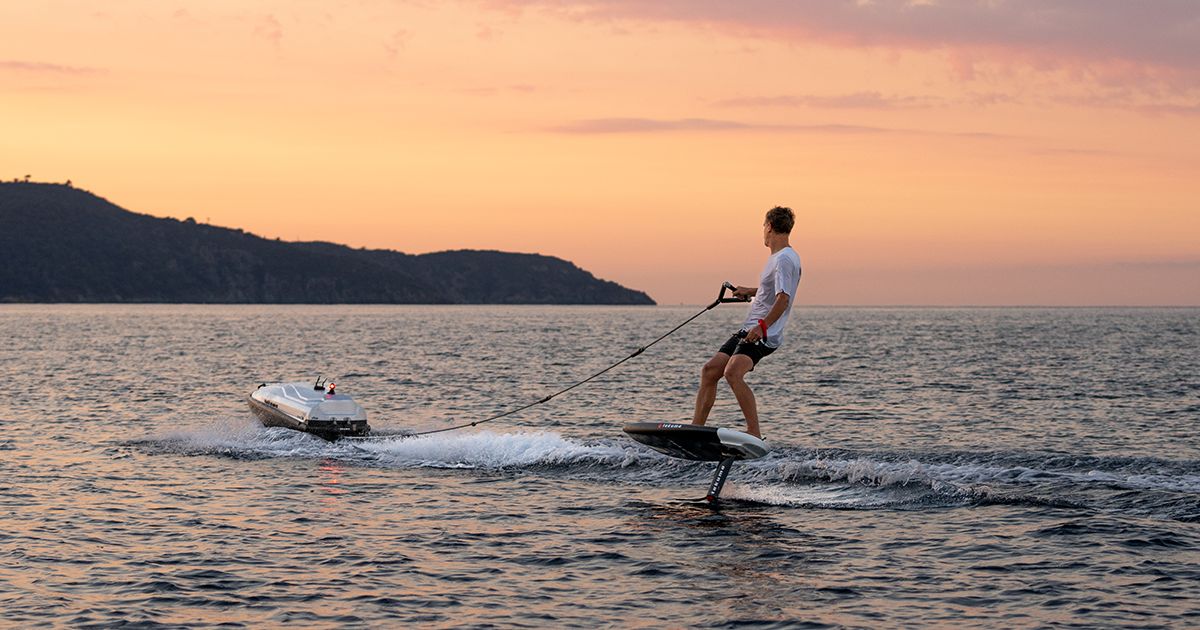 Foiling Magazine:
Do you have to be a proficient foiler to use the eTow? Or can newbies use it too?

Cyril Coste:
The eTow is very intuitive to use. We designed it for foilers, of course, however, it has such a wide range of applications and is so easy to maneuver, that anyone can use it.
It’s definitely the easiest way to learn how to foil. The pull is very smooth and consistent and nothing to compare to a jet ski or a boat given that it’s a soft but powerful pull.
A big advantage is also that you have the option of navigating it yourself or a coach navigating it for you, since you have a 600m reach.

Foiling Magazine:
Finally, is there any room to keep sandwiches in there?

Cyril Coste:
Depends on the number of sandwiches you bring. 😉 But sure, get a drybag and you will find some room to store water, sandwiches, maybe a towel, and a first aid kit.